Uncheck ”Show start workspace When No Documents are …”
Check: Use Legacy ”New document Dialogue” (to get rid of the large, slow and disturbing new dialogue for creating new document, and get the simple old one back).

Change Language to Swedish (or your own language of choice)
Perhaps you’d also like to change the quotes to standard straight ones.

Change the following to prevent Adobe software from taking resources from your computer:

In the Adobe Creative Cloud panel (the separate panel that you can use to install / uninstall Adobe software), open the fold-out menu in the upper right corner (three dots) and select Preferences.
Under ”General”, uncheck ”Launch at login”.

I am however a bit uncertain exactly what it is that is not launched at login with the action above, so go on with the following as well: 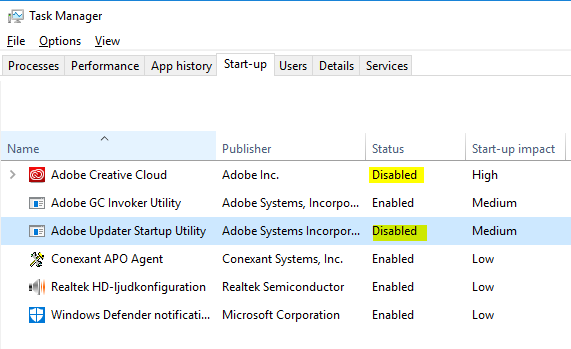 The Start-up tab of the Task Manager in Windows 10. I advice you to keep the ”Adobe GC Invoker Utility” enabled, to avoid trouble with licence checks.

After disabling ”Adobe Creative Cloud” and ”Updater Startup Utility” as described above, you can still open your Adobe software as usual from the Start menu, and perform updates by checking for updates yourself. You just prevent these pieces of software from starting automatically.

Does the InDesign UI (User interface such as menus) look blurry? It seems you will have to change the Windows scaling setting to 100% (it is most likely set to default 125% for your computer).

Also there is a problem with Windows ClearType and Adobe software. Turn it off and you get extremely crisp fonts in parts of the UI, such as panel entries, but at the same time some type faces can not handle cleartype, so you will end up with blurred document names in the tabs on top of the document area, and some other places. This resembles the infamous web fonts problem for web browsers (some web fonts are almost unreadable with ClearType turned off).

When installing InDesign CC2019 on a new computer (win 10 with swedish UI) I got a bunch of errors about missing files, trying to start InDesign for the first time (or perhaps even at the end of the installation). I had installed using the Indesign installer, from Adobe’s web page, which installed the Creative Cloud panel as well. These are the files that InDesign reported as missing: 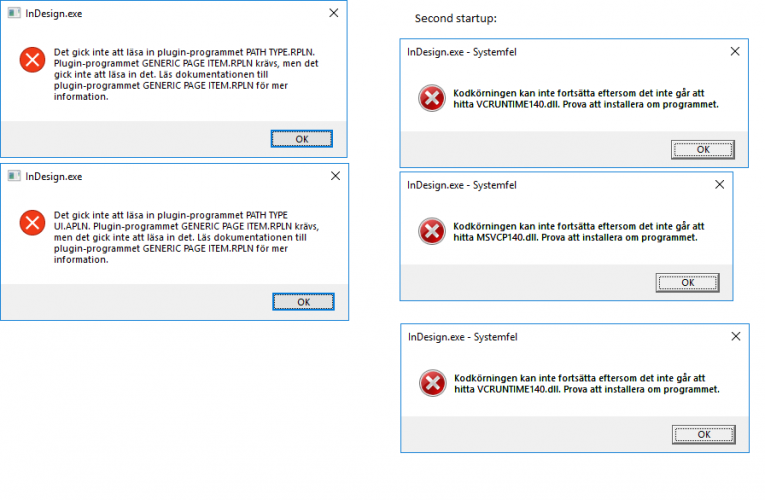 On the Adobe forum there are lots of reports about this. Some people write that you need to install Visual C++ 2015 redistributable manually when you get these errors. I tried to do that but I was not allowed since another version already existed (or some message like that). Instead I uninstalled everything that had to do with Adobe CC, and also all of the C++ redistributable packages (about a dozen) found under ”Control Panel\Programs\Programs and Features”.

Then I changed the Windows Display language to English on my computer. I have no idea if that has any effect on the missing files errors… but running Windows in Swedish obviously made the CC installer choose Swedish user interface for the Adobe software as well, and prefer it in English.

After that I installed the Creative Cloud application as a start (I didn’t select the InDesign installation file as I did the first time, just the CC Application.

From the CC application I selected to install Indesign 2019. And now everything works.